We arrived in Reykjavík to stay in the most adorable historic home right in the city center. Can you believe it? My friends picked a house that matched me?! I think the brown door and gingerbread trim set off my yellow complexion so well.

The house was just down the street from the Hallgrimskirkja, which is the largest church in Iceland at 74.5 metres high. This makes it one of the tallest structures in Iceland – and it is clearly visible from everywhere else in the city.

Outside the church is a statue of Leif Ericsson that was given to Iceland by the United States. Leif Ericsson – or Leifur Eiríksson, as he is known in Icelandic – was a Viking who lived from c. 970 to c. 1020. According to records, Leif was the first European to arrive in America in the year 1000 – 500 years before Christopher Columbus. That was a really long time ago!

“I found this really interesting article about the statue,” declared Paprika, who had been looking at her cellphone while we stood in front of the statue. “Have a listen, Flat Kathy.” (10 fascinating facts)

I huddled closer to her to peer over her shoulder.

“Okay, so the statue was a gift from the United States to Iceland to commemorate the 1000 year anniversary of Alþingi, the parliament of Iceland, which was first convened at Þingvellir in 930 AD. So the statue came to Iceland in 1930. It apparently has an identical brother statue in Newport News, Virginia.”

“Oh, wow! Is that near where you live, Paprika? Wouldn’t it be fun to see the twin statue?”

“Yes,” said Paprika with a smile. “Okay, so the statue weighs over 50 tons. Phew! That’s heavy. And can you see that the statue stands on a pillar? Well, that pillar resembles the bow of a Viking boat, which is a reference to Leifur’s voyage across the sea. According to the original design, the statue was supposed to stand in the middle of a pond – to represent the Atlantic Ocean, which he crossed. But this pond was never built.”

Paprika continued: “The statue actually stood here for 13 years before construction started on the Hallgrímskirkja – the church behind it – in 1945. So that’s quite unusual. In fact, its location was controversial. The so-called ‘School cairn’ used to stand in this place, and it was the best known landmark in town, with fabulous views of the city. But this had to be demolished to make way for the statue.”

“Can we go inside the Hallgrímskirkja?” I asked.

“Of course, come,” said Paprika, as we hurried over to the entrance. “Oregano and the others are already inside.” 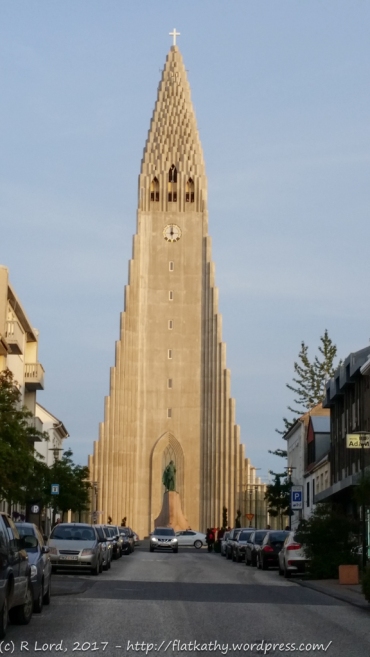 The magnificent tall steeple of the Hallgrimskirkja

The gorgeous pipe organ inside the church

Inside the church is a large pipe organ, 15 metres tall and weighing 25 tons (!), which was designed and constructed by the German organ builder Johannes Klais of Bonn, and completed in 1992. We were lucky enough to be there when a gentleman was playing it. You can’t imagine the beautiful sounds that came out of those giant pipes!

As if that wasn’t enough excitement, my friends  surprised me by taking me up to the bell tower of the church to get a bird’s eye view of the city. I could see all of Reykjavík and all the way to the ocean. Chamomile held on to me tightly because it was so windy up there, but we did manage to get a picture of me with the view of the city in the background. It seems that Iceland is a very wet and windy place, which is not the best climate for an adventurous traveler like me with a delicate constitution.

Tomorrow is our last day here, before we return to the United States. I have had such a wonderful time here, that I am rather sad to leave Iceland. Despite the cold, wet and windy weather we’ve had, we have managed to see and experience so much. My friends – Paprika, Oregano, Cheerio and Chamomile – really have done their best to look after me and show me the sights.

2 thoughts on “A Day in Reykjavik”