After checking in at Cape Town International Airport, we made our way through the security checkpoint and the passport control point to a corridor with lots of expensive shops along one side, and big windows all along the other. We found a restaurant – Cafe Dulce – near our departure gate, where we could sit comfortably while waiting for our flight to be called.

I had butterflies fluttering around my stomach by this stage – and I could tell that Reggie was also looking a little pale (she confided to me that she is a bit nervous of flying).

“How about some tea?” suggested Richard, sensibly. I nodded my head eagerly, as I too firmly believe that tea is good for everything, particularly for butterflies in the tummy.

At last, I could see our flight at the top of the electronic board listing the departures. We briskly made our way to the correct gate (though we first walked the other way to Gate A1, before we realised that Gate A6 was in fact at the opposite end).

We were soon allowed to walk onboard the aircraft, to find our seats and to stow away our carry-on luggage in the overhead compartments. There were three seats on either side, and ours were just above the wings.

We even had a window seat, which was great! I was so looking forward to gazing out through the window – I’ve never seen Planet Earth from above, after all! The seat next to Richard was empty, and Aunty Christa was sitting on the opposite side of the central aisle, in the same row! I did not know it would be such fun to travel with friends!

They screened a couple of short films during the flight, and the cabin crew first served us some cooldrinks, and a little while later, our meals. We had beef and rice, some vegetables, a portion of salad, a breadroll and a chocolate brownie with tea. Ohh, I felt soo fortunate. This was much, much, MUCH better than being shoved in an envelope and flying in cargo – which is how I had flown from Nova Scotia to Cape Town in January this year (remember?).

We didn’t see much of the ground, because there was cloud cover almost all the way to Windhoek. Reggie had especially wanted to show me the Orange River, which marks the border between South Africa and Namibia, but we just couldn’t see it.

“I thought Namibia was a very hot and dry country, with very little cloud cover?” I remarked, somewhat puzzled. Most of the country, as Richard had explained to me, was in fact desert – both sand or dune desert as well as gravel or rocky desert.

“You’ll see the desert when we drive down to the coast next week,” he promised. “Swakopmund was built right on the edge of the desert, and when you arrive for the first time, you can’t help being in awe of those first pioneers who decided to stay and build a town there in the middle of nowhere.”

Oh! My friends, I am sooo delighted to have this opportunity to visit Windhoek and Swakopmund! I feel like I have become part of the family, which is quite wonderful.

Eventually, the aircraft started to descend – this was rather bumpy, because of the turbulence in the layer of thunderstorm clouds. Luckily, Reggie had given me one of her travel sickness pills before our flight, because she was concerned that I might get a bit queasy.

I kept looking outside at the landscape below us – it looked vast and barren, with low shrubs and bushes, and rivers of sand, and arrow-straight gravel roads intersecting each other at startling angles, and on the distant horizon a couple of mountains poked their heads above the level plain.

“I can’t see any cities,” I said. “Aren’t there people living in Namibia?”

“So how many people live in the country?” I inquired.

“Somewhere around 2.2 million people – and I’ve heard figures of 1.5 or 2.2 people per kilometre,” said Reggie. “I’m not sure what the most recent figures are. But the greatest concentrations are in the far north, where there is plenty of water and rain, as well as around the urban centres of Windhoek, Swakopmund, Walvis Bay, etc. The south is very dry, and few people live there. Most people still live in the rural areas, though increasingly they are migrating to the cities to find work.”

“How come I can’t see Windhoek?” I asked. “I thought we’re landing at Windhoek airport?”

“Yes, we are,” chuckled Richard. “It’s called the Hosea Kutako International Airport of Windhoek, but it’s about half an hour’s drive outside the city, which lies roughly to the west of the airport. We’re approaching from the east, so we aren’t flying over the city.”

By now, we were getting closer and closer to the ground, one bumpy step at a time, and suddenly, with a big jarring BUMPETYBUMP, the wheels hit the tarmac. The plane slowed down, as we taxied past the cluster of airport buildings. A couple of other aircraft had parked in front of the building, one with the distinctively colourful Namibian flag on its tail.

The plane slowly did a u-turn and lined up with its nose facing away from the airport building. We had to wait for a while until the steps had been connected to the front door… and at last, we were outside in the fresh air!

Reggie insisted on taking a photograph with me and Aunty Christa and Richard on the tarmac next to the aircraft, “as proof that you’ve flown on the aircraft, Flat Kathy!” I tell you, I was so happy that I thought I would burst!

With all the faffing about, we somehow found ourselves at the back of the queue inside the airport building. Ohh, it was so humid and hot in there! There were several queues – for diplomatic passport holders, for Namibian residents, for SADC residents, and for visitors from other countries. Reggie told me that we were arriving as SADC residents, because we were coming from South Africa. There didn’t seem to be enough counters (I think three planes must have arrived together), because the queues were almost not moving.

The people behind the counters looked so stern and serious, that Reggie put me back inside Richard’s rucksack, “in case they have a problem with your passport and insist that you don’t have a proper visa to enter the country.”

Well, I certainly didn’t want to risk being arrested or confiscated!

At looooong last, our passports were stamped, and we were allowed to retrieve our luggage from the caroussel. Another long queue had formed in front of the scanner; it seemed that everyone had to send all their luggage through this. Luckily, someone in authority must have realised that this was causing a serious and rather unnecessary traffic jam (after all, the suitcases had been scanned in Cape Town already and it’s not like we could’ve bought and stowed away anything in them during our flight), and we were waved through.

On the other side of the security doors, we were greeted by crowds of people, all waving and smiling, it was quite overwhelming. Suddenly, a cheerfully smiling woman with a purple shirt rushed towards us to embrace us in welcome.

“Flat Kathy, this is Aunty Lissi,” Reggie introduced me politely.

“I am so pleased to meet you, Flat Kathy,” replied Aunty Lissi, shaking my hand, “I have heard so much about you. And I’ve received your postcard!”

“Oh, that is lovely news,” I smiled back at her. “Thank you for allowing me to visit you. I hope you don’t mind that I’ve brought the Twins too.”

“The Twins?” she gave me a bewildered look. “What Twins?”

“Reggie, didn’t you tell her about the Twins?” I scolded.

“I’m so sorry, I completely forgot,” apologised Reggie. “Yes, Flat Kathy is currently fostering Twins – Thabo & Bheki. They were naughty, so we packed them away in the suitcase. I’ll introduce them later. I hope they’ll behave themselves during our visit!”

Aunty Lissi laughed good-naturedly, “Oh, don’t worry, we’ll sort them out! I managed to bring up two naughty children already, I’ve had plenty of practice! And look how well they’ve turned out!” She winked playfully at Richard (she is his mommy, in case you’re wondering.) Richard grinned back wryly.

I feel so much better; I’m sure that Lissi will be able to give me some helpful motherly advice. I’m new to this motherhood thing, after all.

We made our way to the car, which was parked some distance away. I noticed that I was feeling a little out of breath.

“It’s the thinner air here,” said Reggie. “Cape Town is at sea level, Windhoek is at about 1600m altitude. It’s not a particularly high altitude, but the rapid change may make you feel a bit breathless for a day or so. But you’ll be fine, don’t worry.”

Aunty Christa took the wheel, because it was her old style Mercedes that Aunty Lissi had driven out to the airport; it has a very big boot, which was great for all the luggage we had brought. About three-quarters of an hour later, we arrived at Aunty Lissi’s home in Windhoek. I will tell you more about that later!

What an exciting day this had been!

Once we have gone through security, we have some tea and coffee at the departure lounge

We’re inside the plane now and waiting for our departure 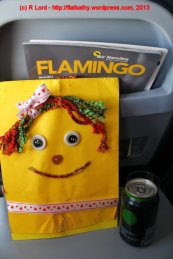 I can’t believe my luck! I am actually sitting inside the cabin! It’s an Air Namibia flight

The cabin crew serves us some appletiser and other juice

It’s such a delicious meal – beef and rice, salad, a chocolate brownie… 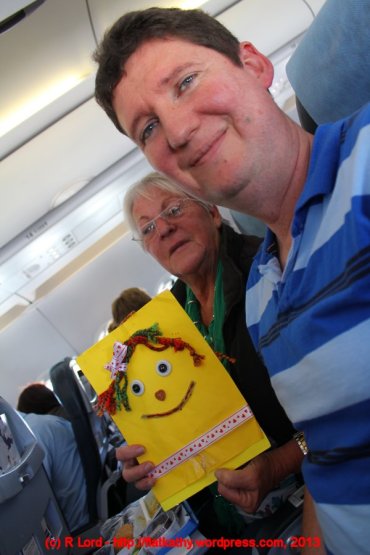 I can’t believe my luck – Aunty Christa is sitting with us in the same row!

It’s so strange to be flying above the cloud layer 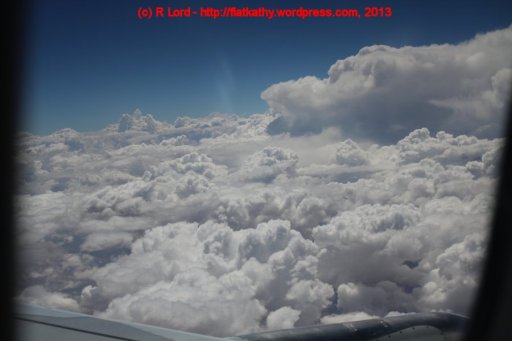 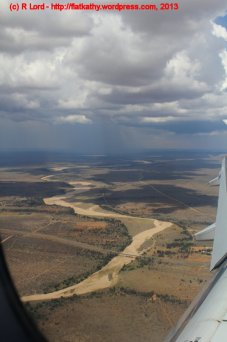 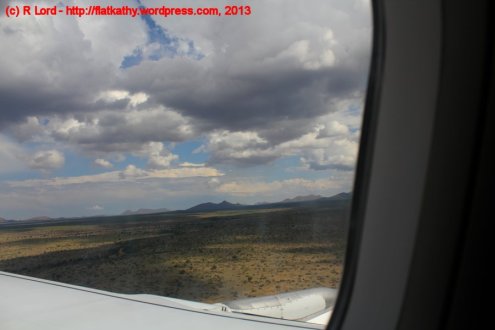 Flat plains, mountains in the distance

We touch down on Namibian soil

It is a lovely small airport

A Namibian aircraft – that’s the Namibian flag on the tail

Aunty Christa, Richard and I in front of our plane